I have a website with links to videos on YouTube.
A year ago I was contacted by a large copyright holder who claimed I was linking to illegal copies.
And they asked that I remove these links.
I obliged.
But I pointed it out to them that the videos had been available on YouTube for may years (up to 10 years)
And they should get these removed quickly.
Now after one year these videos are still on YouTube and are viewed up to 100000 times.

What is the legal situation in this case?
Can it be claimed that the copyright holder through his continued negligence to remove the videos is implicitly agreeing that his videos are available and being viewed by anyone. Thus how can a link to these videos be illegal under those circumstances ?

I would very much appreciate to get some legal comment on this situation.
Top

Assuming you are based in the UK or the EU (no longer the same thing now!), then linking to copyright works hosted elsewhere is perfectly legal in most circumstances even if the content you have linked to is unauthorised content, as in the case you mention. There a several recent decisions from the Court of Justice of the European Union (CJEU) which provide a high level of certainty on the issue. The only exception is if you operate a site "when the posting of hyperlinks is carried out for profit", in which case you may be liable for infringement if you fail to make adequate checks that the content has legally posted, or if, knowing that it is illegal content you go ahead and post the links anyway. Note this is not about whether your site makes profit from other sources such as advertising or selling goods or receiving Patreon support etc provided that these sources of income are not in turn driven by the posting of links.

The relevant cases are known as Svensson in which the CJEU found that just linking to another site did not infringe copyright provided that the linking could be accomplished without circumventing logins or paywalls etc, Bestwater (judgment not available in English) in which the court went further and said that even framing the link so that the content appeared to form part of the first site, did not infringe copyright. The next important decision is known as GS Media in which the court then considered the additional factor of the hosting site to which the link points not being authorised by the copyright owner to make the work available to the public. Here the CJEU decided that the site doing the linking was not liable for copyright infringement unless that site was being run for profit resulting from kind of links under discussion. Where this was so, the site had a duty to first establish whether or not the hosted content was authorised content. To date we have no real idea of the lengths to which a site run for profit is expected to go to in order to establish the legality of the hosted content. Given that Youtube has a relatively efficient system known as ContentID which actively seeks out infringing material, and a separate system for responding promptly to DMCA takedown notices, does that constitute sufficient due diligence which the owner of a web site that provides links to material on Youtube can rely on?

Here's a handy chart which shows the effect of each successive CJEU decision, produced by my former blogging colleague Dr Eleonora Rosati, an Associate Professor in IP Law at Stockholm University: 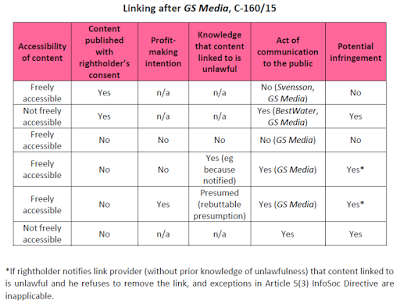 A larger version is available here
Advice or comment provided here is not and does not purport to be legal advice as defined by s.12 of Legal Services Act 2007
Top

Thank you for your extensive explanation.
Actually I think I probably knew most of it.

My specific question is as follows:
Can the non action of a copyright holder with regard to a video he owns the rights and has known about it for years be argued to be an implicit consent of publishing. And could this argumentation hold in a court?
Top

Yes, if a copyright owner knows someone else is using their copyright work without permission and does nothing about it, they can forfeit the right to take action at a later stage. The legal term is estoppel, ie the owned is 'stopped' from exercising a right they would normally be able to make a claim over. There is also a separate common-law* doctrine of laches which covers roughly the same circumstances. Laches is a legal term derived from the Old French laschesse, meaning "remissness" or "dilatoriness," and is viewed as the opposite of vigilance. In other words it is something which applies directly to the rights owner.

Estoppel by acquiescence is a defence able to be used by someone when a claim is made against them, especially if they have made some sort of financial commitment on the reasonable assumption that the rights owner did not intend to enforce their rights.

There are several factors which need to be considered. First, of course, the rights owner needs to be aware that the infringement is occurring - in this case they must do because they have traced your link which refers to Youtube, and as you have done, they can see that the video has been up a considerable length of time. Second, neither laches nor estoppel will apply if the rights owner took action as soon as was reasonably possible and that process is still ongoing. The period of acquiescence must be reasonably long, and in this case 10 years would almost certainly qualify, as it is well-known that Youtube will act quickly to remove infringing material once notified. Conversely, an owner who deliberately allows an infringement to continue for a longer period in order to increase the potential damages is acting in bad faith and the courts will be more inclined to accept a defence of either laches or estoppel, or both. The word reasonable is highly relevant here: your action or assumption must one that a reasonable person would make; and the delay by the rights owner must be unreasonable in the circumstances.

Obviously there may be things going on here of which we have no knowledge, but on the facts as you have stated them I would be of the opinion that this copyright owner would be estopped from taking action against you, even the informal action of demanding you remove links which, because of the GS Media decision, would be perfectly legal in the circumstances.

* Strictly speaking laches is a form of equity, not common law, but we don't need to go into the intricacies of that here.
Advice or comment provided here is not and does not purport to be legal advice as defined by s.12 of Legal Services Act 2007
Top
Post Reply
4 posts • Page 1 of 1